It is a never ending story: every time I want to write an article to publish on my website, I change my blog engine instead. At some point I even created my own static website generator. All this fuzz just to avoid actually writing things to … you know … put on a website :). This might be excused by the fact that I really enjoy spending my leisure time tinkering with things aimlessly rather then actually producing something that might be useful, but I finally started seeing through my evil self-sabotage mechanisms and was determined to put a stop to it! So I did the natural thing: I went to my lab [1] and tinkered with the engine.

I played with a lot of blog engines over the years - while never really blogging anything. I mostly work in backend development, but there is something that fascinates me about web design and web development. It’s one of these things I guess :).

I am particularly fond of static website generators that provide a workflow that is similar to developing software. I played with pelican, jekyll, hugo, nikola, flask + frozen-flask and the lot. As already mentioned: I even wrote my own sphinx based generator … while still never really blogging anything.

At the beginning of 2017 I made a deal with a colleague that I would finally write a blog article about the pytest development sprint and a bit about my involvement. It would have been boring though if I would have used the site I had already online (last incarnation was a simple mkdocs driven thing). It would also have been boring to use one of the engines I already knew. Using something utterly profane like medium or wordpress was obviously completely out of the question! I mean, I could have just written the article then and be done with it. Who wants that? Right. Not me. So I started looking around for the next thing that could keep me from writing that article and I stumbled over lektor. Now this was something that could keep me busy for a while as it is not simply a static website generator, but rather something that you can use to build a static website generator with - a website generator generator! Long story short: I set that up from scratch with a simple sass style, wrote a little plugin to integrate that into lektors development server, and finally actually wrote and published that article. Nobody ever made a deal with me again that forced me to write another article, so that was it. I had unlocked the “i-have-a-blog-but-i-never-blog”-achievement once again - only on a higher level. Until very recently.

Because very recently I realized that I had produced a lot of material while trying to teach Python and test automation to all kinds of folks over the last years. I finally wanted to start sharing some of these materials on my website. As making strange deals seems to work with my contorted psyche, I made a deal with myself to publish at least one article a month for at least a year.

This time I was determined to resist the temptation to start from scratch and resolved to adjust the existing setup to fit my new needs. The new needs arose from the fact that I work mostly in Jupyter Notebooks nowadays, when creating learning materials and I like it, so I want to write articles like that and have them integrate into my website.

If you don’t know Lektor at all yet, here is the minimum amount of knowledge necessary to follow this article:

To build a page, Lektor takes a folder, a data model defined in an .ini and a Jinja2 template. The folder for the page needs at least a contents.lr file - a simple lektor specific text file format. This file contains data that fits the user defined data model. Usually this is some meta data about the content and the main content of the page formatted in markdown.

Lektor is extensible via a plugin system that involves creating an installable package and implementing some methods in a class inheriting from lektor.pluginsystem.Plugin. Methods in that plugin class will be called, when Lektor emits events in different phases of the build process.

Did someone else solve my problem already? 🔗

To integrate Jupyter notebooks, there is already a plugin that hasn’t been worked on for a while and is more of a prof of concept. It was a good starting point though to see what it does and to decide what I want:

Not really, so I created my own 🔗

lektor-jupyter-preprocess is a Lektor plugin that does the following:

Generating markdown from a notebook comes out of the box via nbconvert - so if you take a notebook that looks like this in the browser: 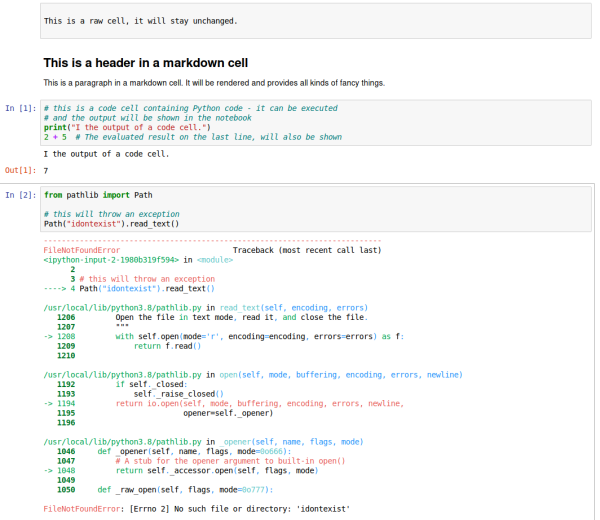 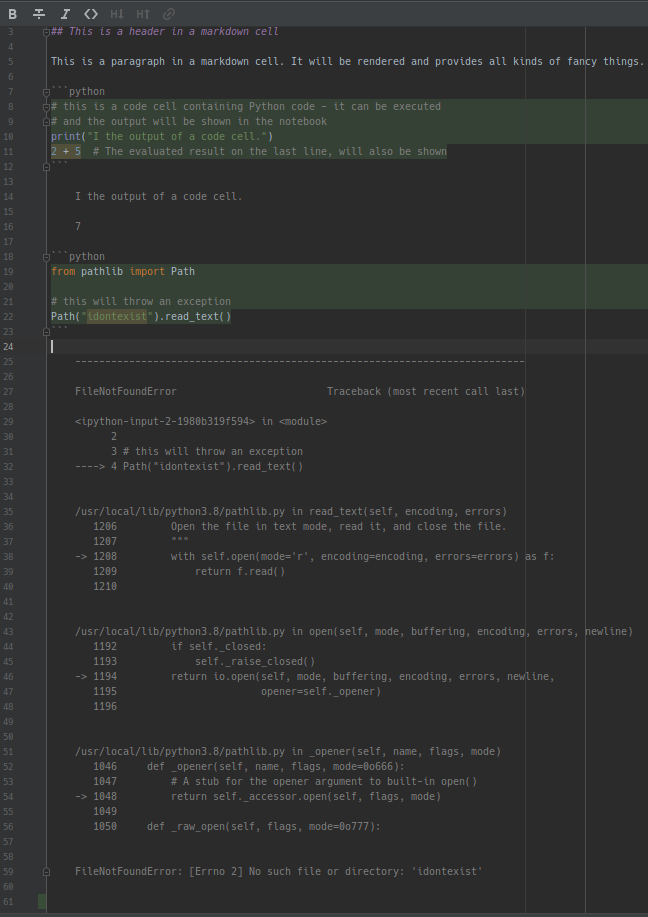 This is somehow already what I want, but I want the output to be marked properly and I don’t want the whole traceback - just the name and message of the error is enough. So there is a little bit of massaging to be done. The question is: when should that happen? I could try to massage the generated output to my liking, but I’d rather poke a finger into my eye, so this has to happen when I can still work with the data.

Thanks to the friendly Jupyter Development Team, nbconvert is written in a way that it is not too hard to make this possible by inheriting from ExecutePreprocessor. This lets you hook into the execution of individual code cells and massage the contents there. So this is what I came up with:

This is how it is configurable at the moment:

The idea is to hook into the part of the conversion process where the notebook is preprocessed before the actual conversion to markdown.

In my case the necessary preprocessing means:

The complete plugin code is in lektor_jupyter_preprocess.py

If I run this through nbconvert now, the generated markdown looks like this: 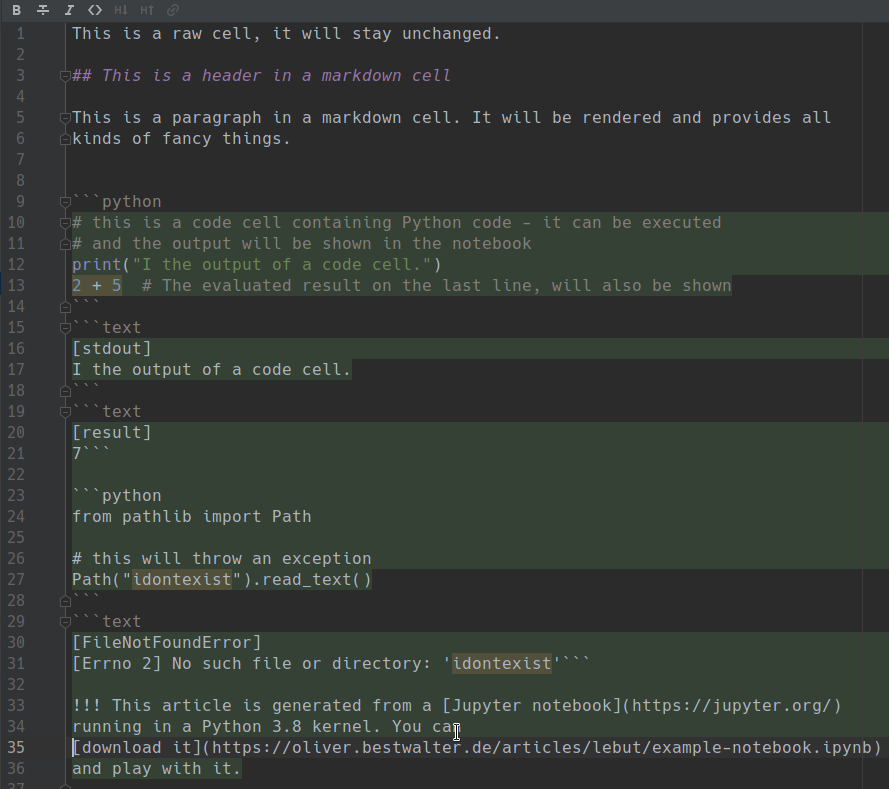 That’s more like it and I can tweak and extend the conversion process, whenever I need to.

The first incarnation of this used the before-build event that is called indiscriminately before a source is built. This caused an eternal build loop when generating the contents.lr from a notebook. I prevented this by adding caching to detect if the notebook had changed since the last build. This worked but was ugly. I had set out to only make this work, so I decided I was finished. The next weekend though I couldn’t help but having another look.

The current incarnation adds a new build program that slightly modifies the attachment build behaviour for “notebook powered” pages to preprocess the notebook as part of the normal build process. Still not knowing much about Lektor this might be less wrong, but more importantly: it works reliably without needing extra caching, and is easier to understand in the context of a build. I also like it more, because this motivated me to look a bit into how Lektor works. Which was very interesting.

These events are used in the plugin:

If you want to try it in your Lektor project 🔗

In the simplest case:

Additionally to generating the notebook the plugin injects the global variable JUPYTER_PREPROCESS into the jinja template which at the moment contains:

Here is how a footer with a link could look like using that data:

tox based development and publishing workflow 🔗

To cap it all off: if a project hasn’t got a tox.ini that wraps all important activities of the project into a neat package it doesn’t feel like a real project. So this is what tox -av tells me about the workflow of my Lektor project (in case I don’t write another article for the next three years and I come back to it and have no idea how stuff works 😉):

Now I have a reasonably pleasant workflow to turn my notebooks into website articles. I am pretty confident that I will be able to keep that deal with myself :).